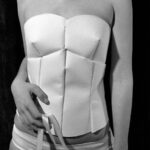 The idea sprang from an assignment in college when I design clothes. I don’t sew and while attempting to learn decided it was much easier (faster/cheaper) to work with paper. There is nothing new about paper clothing in fact it was very popular in the 60’s though few examples remain today. I didn’t have time to take the concept further and really only made it to this prototype which was made from the heaviest paper I could buy from the local art supply store. I used staples to hold the garment together as opposed to sewing it. The corset was very stiff when dry and had to be wet in order to put it onto the model. Not seen in the photos are the back which was left open and had grommets punched into the paper where it was then laced up using ribbon.

Through the process of creating this piece I realized that there was a lot of potential in creating other pieces and continuing the project into an exhibit of works/clothes and a happening/fashion show. I left color out of this project to simplify it and focus on structure and form. In taking this project further both color and pattern would play an important role as well as utilizing more modern mediums such as digital printing.

I like the implication of the whimsical paper dolls of an older era and the concept of not only displaying the finished pieces but the process of transforming the 2D into the 3D. I envision the two dimensional works would resemble patterns used to create clothes and also have a design element of paper doll books with bright colors and patterns and possible hand water colored sections.

No filter. Daniel on a kayak.

Today was a good day.